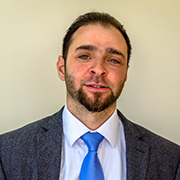 As Director, he assists the Commission in its mission to review pre-trial and sentencing policies and make policy recommendations to the General Assembly and the Governor.

Prior to joining the Commission, Mr. Tsarkov worked for the Judicial Branch Court Support Services Division (JB-CSSD) as a Court Planner for two years. Prior to JB-CSSD, he worked at the Connecticut General Assembly from 2007 to 2013. As the aide and clerk of the Judiciary Committee, he worked on numerous issues affecting the state’s criminal justice system including diversionary programs, eyewitness identification and juvenile sentencing.

Mr. Tsarkov holds a Master of Public Policy degree from Trinity College and is a graduate of the University of Connecticut School of Law.